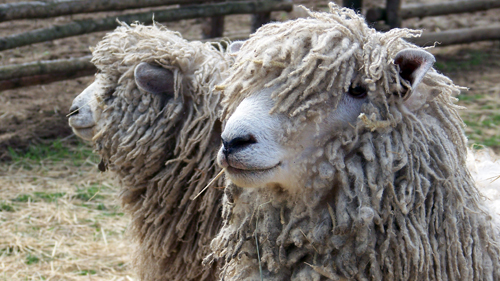 Almost as tame as a dog, the Cotswold sheep are docile and friendly, eager to interact with people. These animals have thick heavy fleeces and are capable of enduring hardship and exposure. It originated on the bleak Cotswold hills of Great Britain, and the breed was brought to Canada from England in the 1860s. It has been recorded that in 1865, sheep of this breed were purchased in Halifax at prices ranging from $22 for a ram to $60 for ewes. Flocks of sheep about this time were numerous in many areas across Nova Scotia.

In the 1800s the Cotswolds became some of the most numerous long woolled sheep in the world. In contrast to the short woolled Southdown breed, the Cotswold sheep could yield a fleece three times the weight of a Southdown fleece. The wool from the Cotswolds was also longer and stronger, which also aided in its preference. Even though the wool of Cotswolds was very sought after, their continued main purpose was for both meat and mutton.

By 1870, the preferred rams had become the Cotswold. Between 1878 and 1914 there were almost 75,000 purebred Cotswolds registered in the American flock book. By 1978, however, the numbers had dwindled to 78. The situation had become drastic in the 1980s when there were an estimated Cotswold ewe population of just 35 in Canada. Since then, the number of sheep and breeders has risen once again, especially since 1991.

On most farms in earlier periods, purebred sheep were not practical as a means of producing everything the farmer needed. Farmers often crossbred their sheep in order to pass on more of the desirable traits that each breed possessed. For example, the hardiness of the Southdown sheep and the strong wool of the Cotswold could have both been preferred. So the farmer would cross breed the two sheep, creating a better sheep for himself, but aiding in the destruction of the two purebreds along the way. This is one of the major reasons that many breeds of sheep, such as the Cotswold, have dwindled over the years. The crossbred sheep, while having characteristics of at least a couple purebred breeds, became known as “grade” sheep.

The Southdown, a chunky short - woolled animal, is one of the oldest purebred sheep in the world. It originated on the slopes of England’s chalk hills, referred to as the “Downs” of Sussex. The breed seems to have grazed on the dry, rich “Downs” grass from the earliest times. Many of the Southdown sheep were bred by the English aristocracy including several reigning Monarchs. 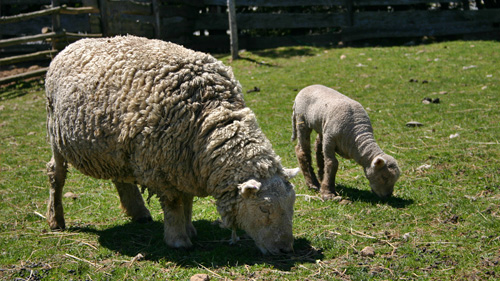 They were known at one time to be the best mutton sheep in the world, adaptable to any climate and style of farming. The ewes make excellent mothers and are prolific breeders, frequently producing twin lambs. Records indicate that Southdowns were among the animals brought into North American British colonies as early as 1640. Documented importations were made into Pennsylvania from 1824 to 1829 from the English flock of John Ellman and later on into Pennsylvania, New York, And Illinois from the Jonas Webb flock. These two men are considered to be the standardizers and improvers of the Southdown breed. The first pure Southdown reached Canada in 1845. By 1900 Southdown were the most widely distributed sheep in the world. In contrast to that, in 1984 only 265 new registrations were entered in Canada.

The Southdown is also renowned for its amenability. It was described as having “the carriage of a gentleman and the walk of a thoroughbred” and is considered to be one of the great sheep in history.

Considering the closeness of the Atlantic Canada settlements, such as the distance between New Brunswick and Prince Edward Island, the Southdown breed was improved greatly throughout the 19th century. For example, by 1900 Southdown sheep became shorter, with smaller necks than they had in previous eras.

Despite the changes and improvements to the Southdown breed, their disposition and productiveness have not been compromised. They continue to be classified as a hardy breed of sheep that are able to thrive on dry and thin pastures. It was this personality and fruitfulness that allowed the Southdown sheep to become the most widely spread sheep in the world by 1900. However, by the 1880s the Shropshire breed was beginning to take over as the most sought after sheep.