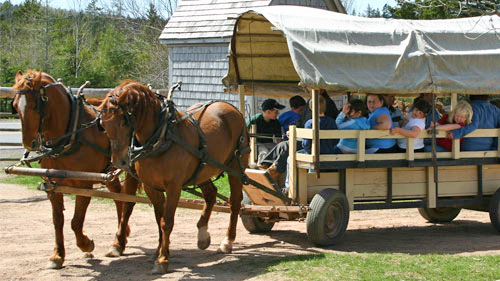 The Canadian is Canada's national horse. One promoter of the breed insists that they can do everything but dance. It is an ancient and historic breed and astonishingly, it nearly became extinct. At present the Canadian is considered to be recovering.

In 1990 Ross Farm Museum (under Director Allan Hiltz 1969-2000) developed a heritage animal program and three Canadian horses were purchased. Heritage animals are a natural part of the museum's collection, giving a true picture of agriculture as it was in pioneer days. Less than 250 Canadian horses were in Canada in 1990. According to Rare Breeds Canada, the horse is currently in the midst of an upsurge in popularity and is gaining in numbers. As of the end of 2008 there were over 12,000 registered Canadian Horses. The breed is now classified as at risk but recovering. This affectionate horse is lightweight, medium sized and a nifty horse to ride. With careful selection and mating, the result is as good as the earlier stock of the settlers.

At present seven of these charmers are right at home at Ross Farm Museum in New Ross. These horses are used at Ross Farm singly or in teams of two hauling farm implements, buggies, wagons and sleights.

Historically, the strong Canadian was ideally suited for pioneer life because of its ability to perform light agricultural work and to provide transportation. Adaptable to the miserable road conditions of the times, the sure-footed horse could travel 60 miles a day and negotiated deep ditches or mud holes and could get through the deep snowdrifts of the notorious Canadian wintertime. It traveled in harness for carriage transportation or saddle as a roadster and as a Sunday or festival racer. Though technically not a racing horse, the Canadian can be boldly quick and high spirited.

With a reputation as a healthy, gentle, dependable steed, it took doctors on their rounds from morning till night, going all day at a speed of about 12 miles an hour. It cleared and cultivated the soil, harrowed the garden, hauled timber or goods to market, and logs that built houses and wooden ships for hundreds of years.

Some of the best qualities of the Canadian are its strength, willingness to work, and its small food requirements, able to thrive on anything or almost nothing, making it ideal for early farmers. At the same time it is long-lived and still useful at an advanced age. Some are known to have attained record ages. Mares are extraordinarily fertile, having a longer breeding life than other breeds. A Canadian mare can reproduce regularly until the age of 20 or even older and foals are comparatively easy to raise.

In height Canadians are usually not more than 15 hands high, weighing an average of 1,100 lbs. Described as quiet, easy to train and relaxed, they have wide foreheads, clear intelligent eyes and fine muzzle. Characteristically, the horse displays a strong, well arched neck and a deep wide chest. They are noticeably different from other horses mostly because of their size. With large eyes and alert ears, the rugged little steeds have been called by various names over the years such as the French, Norman, Canadian, French Canadian and Canuck.