Chickens, geese, turkeys and ducks are barnyard birds. In the past, Nova Scotian chicken coops were full of breeds such as Buff Cochins, Silver Gray Dorkings, and Silver Spangled Hamburgs. Today, the following breeds of poultry can be found at Ross Farm Museum. 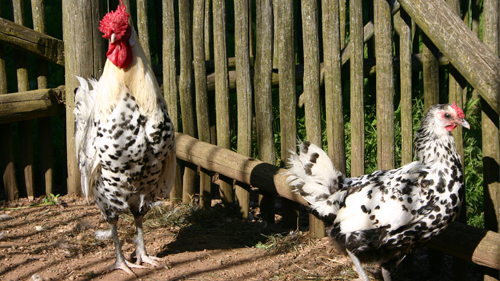 The Hamburg has been kept in the north of England under differing names for centuries. Small, pheasant-like, they have the record of being the best laying breed in existence. They have been known to produce 240 eggs a year. Small eaters, the Hamburgs are known for their great beauty. The cock has extraordinary plumage, sweeping tail and well shaped rose comb. The hen is rich in colour, sprightly in carriage, and neat. there are five varieties, the Black, the Gold Penciled, the Silver Penciled, the Gold Spangled and the Silver Spangled. At Ross Farm Museum our Hamburgs are silver spangled. 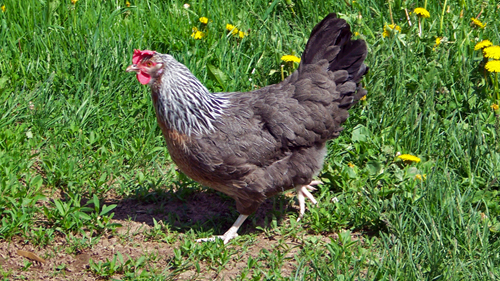 A very old breed of fowl described in writings reaching back to AD 47 which said, the breeding hens be of robust body, square-framed and broad-breasted, large-headed with small erect bright red comb. The writer also specified the five toes as its essential characteristic. Colour combinations are silvery white and black for males, white and ashy gray for females. Both sexes have a 5th toe, and a long body on short legs.

Ducks There is an increasing interest in waterfowl and most of this interest has centered on keeping wild ducks and geese in captivity because some of them are endangered in the wild. All important breeds of domestic duck are said to be descended from the Mallard. The Muscovy duck originated in South America and is a distinct race. When it is crossed with other ducks, their offspring are sterile, Ducklings can go to the pond two weeks after hatching.